WHAT YOU MAY NEED DURING THE TOUR?

We will take care of everything else!

WHAT LITHUANIA HAS TO OFFER YOU?

UNSPOILT NATURE. The land of forests and lakes. Low population density means that most of the country consists of forests, lakes and farmland. Pollution levels are low, with problem spots few and far between, so expect to find most of the countryside in its natural pristine condition. Significant areas are designated national or regional parks that have their own facilities.

TRAKAI – the ancient capital of the Grand Duchy of Lithuania is nestled amidst picturesque lakes. It is best known for its captivating 14th century fairy-tale castle on an island on Lake Galve, now housing a museum. Other than exploring the Gothic red brick castle, the town of Trakai itself with its quaint architecture is well-worth wandering around. There also are plenty of options for fun on the placid waters of the surrounding lakes.

VILNIUS OLD TOWN – boasts outstanding architectural diversity in one of the largest and best-preserved old towns in all of Central and Eastern Europe. This UNESCO World Heritage site is filled with Gothic, Renaissance and Baroque masterpieces. Cosy streets, nice people.

FOOD, DRINK, NIGTLIFE. Satisfy your appetite. Eating out in Lithuania is certainly a rewarding experience. There are options for every taste and occasion, from typical Lithuanian cuisine to exotic ethnic restaurants. Lithuanian beer is renowned for its distinctive full-bodied flavour and is to be found nearly everywhere. Vilnius features a dynamic and vibrant nightlife which is definitely not to be missed.

SPA TOWNS. Revitalise your body and soul. Famous for its mineral springs, the spa towns of Druskininkai and Birštonas have attracted those seeking to improve their health for centuries. Nestled in a beautiful pine forest along the Nemunas River, the town of Druskininkai is famous not just for its mineral waters and local healing muds, but also its picturesque surroundings, ideal for walking and cycling.

A LOT OF DIFFERENT ACTIVITIES. Lithuania is very good base for canoeing, flying hot air balloons, parachute jumping, riding a horse, riding off-road jeep, And there are many more activities you can do for a small price. 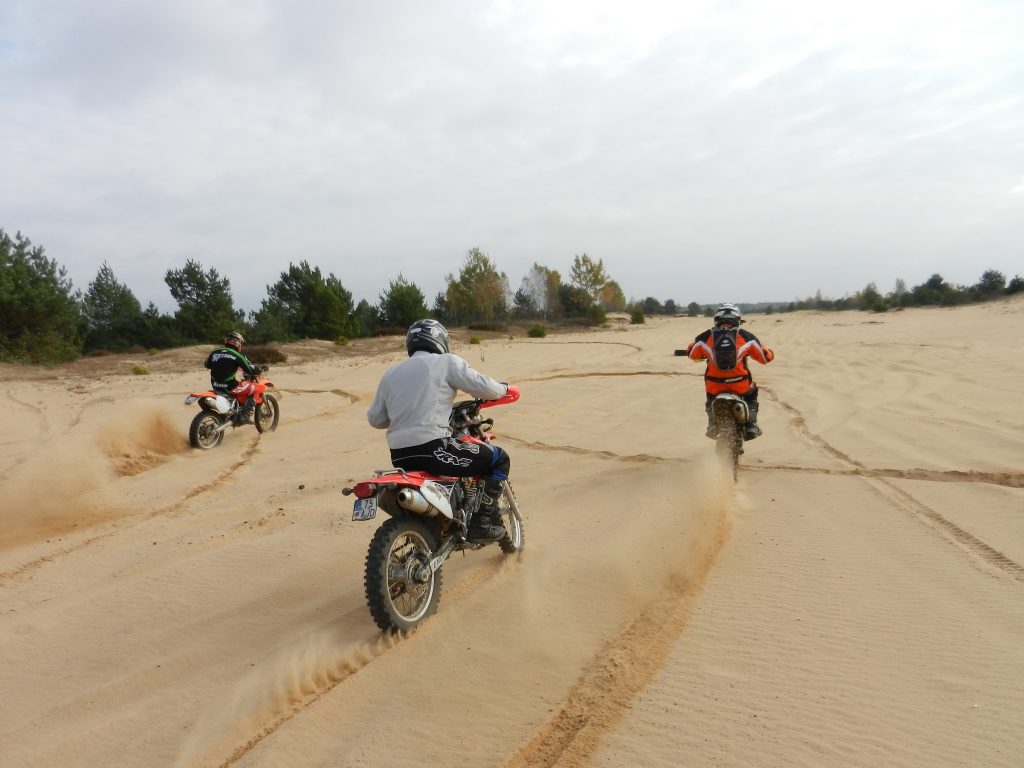 Military ground near the biggest Lithuanian forest (PABRADE). This long and interesting track leads you to the region that has many lakes. We will pass a lot of reserves and regional parks. Here many beautiful places wait for us, such as: lakes, forest roads, ground sands, fords. Stay overnight near the longest lake of Lithuania, where we will go over the lake by boat. Length of the tour is about 280 km. This could be for 2 days tour.

Military ground with sandy oasis (RUKLA). It is a good start to learn hard enduro driving skills with a short lessons, small race in Rukla military training ground. A lot off desert sand and beautiful scenery. The track passes near the river in interesting landscape. Length of the tour is about 160 km. This is for 1 day tour.

Military ground RUDNINKAI. Overnight in ancient Lithuanian village ZERVYNOS. Fast and interesting ride through the forest areas to an ancient Lithuanian village called: „Zervynos“. Stay overnight and have a tradicional regional smoke sauna. In the morning we go canoeing in the Ula river (2-3 hours), where you will experience the beautiful and unspoilt nature of the biggest Lithuanian national park. Length of the tour is about 300 km. This is for 2 days tour.

The track is depending on the type of motorcycle you drive and the driving experience you have. Instructor always is teaching to drive on off-road. 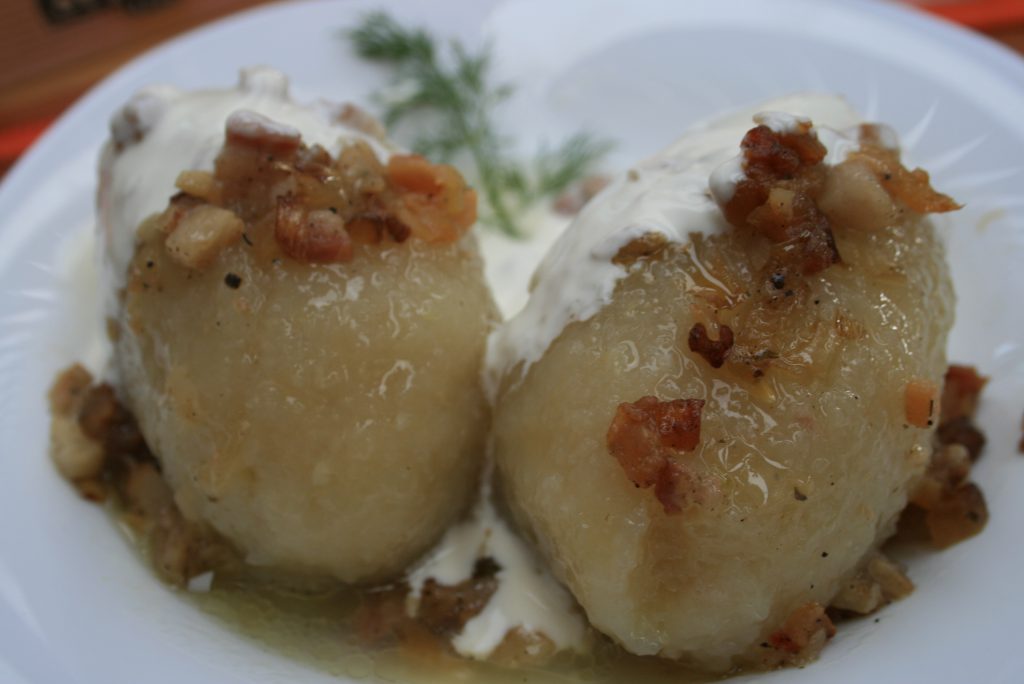 Cepelinai are potatoes’ dumplings with meat inside. They are usually served with special sauce “spirgučiai” (fried fat pork meat with onions), and sour cream. We love this dish! It is good!

Yes, it is pink. It is a cold beetroot’s soup – made with beetroots, kefir (sour milk) and cucumbers. It is then garnished with green onions, dills and hard boiled eggs. And it always comes with a side of boiled potatoes with dill. So good!

Dark bread is very popular in Lithuania, because it has real traditional flavour. Rye-bread has an original sour flavour and is very different from wheat bread. In Lithuania we eat rye-bread every day. We like it with soups; we make sandwiches of rye-bread and sausage etc.

Šakotis (pronounced Shakotis or Bankuchenas) is a traditional cake made in Lithuania. This is one typical Lithuanian desert. Taste like a cookie, vanilla or cannel. Normally it looks like a tall tower and is empty inside. It is funny to eat because everybody takes a piece breaking the pie.

Ask any Lithuanian which beer is the best and they will most likely tell you “LITHUANIAN BEER of course”. There are many kind of beer: light, dark, live, wheat. You can try all of them and find your taste. “Kepta Duona”, Lithuania’s favourite bread snack with beer. Strips of bread are seasoned with garlic and spices, toasted and cooked in sunflower oil, and then served under a pile of melted cheese.

An exclusive dish in Lithuania is smoked fish: carp, eel, bream, mackerel, pike-perch, herring and catfish. Fish is smoked according to special traditions passed on from generation to generation. Just wait and find out yourself – it’s more than delicious!

KIBINAI (Pastry with meet and onions)

It is a Karaitian dish. They are people of Turkish origin, who have lived in Lithuania for over 600 years. The Great Duke of Lithuania Vytautas brought several hundreds of Karaites at the end of the 14th century. They managed to save their traditional cuisine till our days. 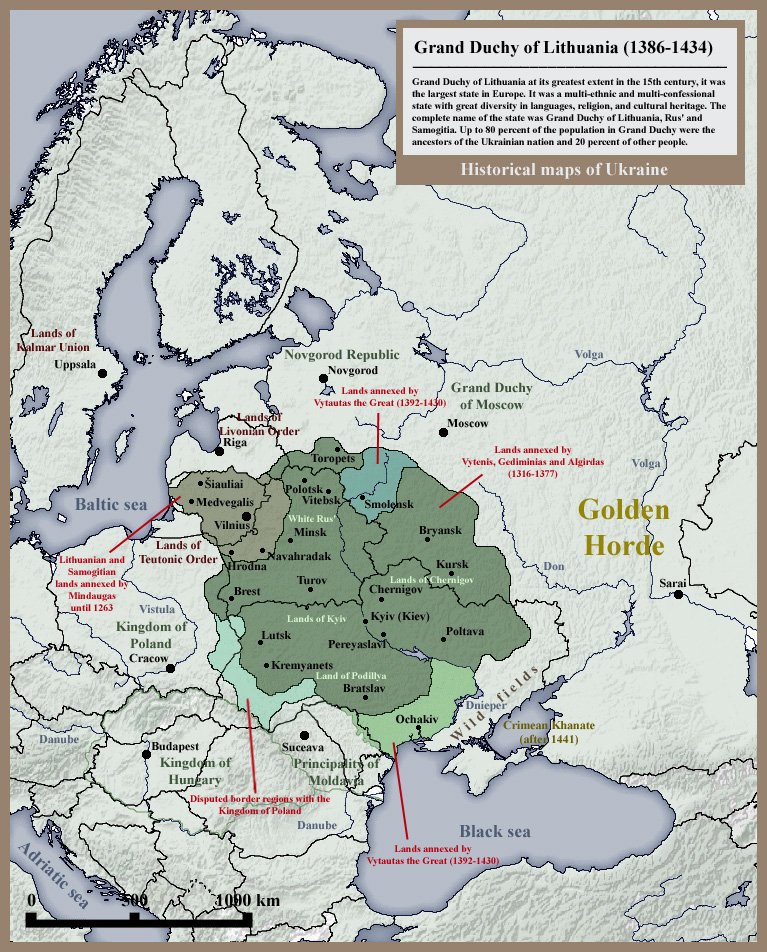 The territory of the present Lithuania has been inhabited since the tenth millennium BC, after the last glaciers retreated and human settlements were founded. The territory wasn’t occupied by the Roman Empire, but the tribes did maintain a trade contact with Rome on the famous Amber Road. The history of Lithuania begins in the 11th century when the Lithuanians formed an early statehood, which later developed into the Grand Duchy of Lithuania.

In the 14th century the country entered a union with Poland, which lasted until the very end of the 18th century. The union was one of the strongest states in Europe, but the ruling Jagiellon dynasty was losing control over the more and more determined nobles. Poland had a very strong influence on Lithuania in these centuries, and the two countries grew very close. After the death of the last Jagiellon kin gin 1569, the Polish-Lithuanian Commonwealth became an elective monarchy, a quasi-democratised state in the era of the absolute monarchies all around Europe.

The once powerful state gradually lost competitiveness against the stronger neighbours in the 17th and 18th century, and was partitioned by Prussia and Russia. The idea of Lithuanian independence was kept alive through the 19th century.

Poland regained it’s independence after the First World War, but had to fight for freedom against Russia and Poland. After only four years of democratic governments an authoritarian regime took control of the country in a military coup. In the years of the Second World War Lithuania became a battlefield of the German and Soviet forces, until the victory of the latter. After the Second World War Lithuania became a part of the Soviet Union, under communist regime.

Lithuania became independent from the collapsing USSR in 1991, the Soviet Troops left the country in 1994. The democratic government denationalized the state property, liberated the market and successfully reoriented the country to the Western states. Lithuania has been a member of the European Union and the NATO since 2004.

SOME LITHUANIAN WORDS FOR YOUR TONGUE

Congratulations to the winners! And look forward to the next stages of Enduro Rally:

The most active enduro rally fans should be happy to hear the hottest news of this year:

– The competition consists of three stages. The last time it was done in 2010;

– 21 races in different places of Lithuania and Latvia have passed, but they have never been held in the center of Lithuania – Gaižiūnų polygon;

– Prizes for participants have been the most diverse, high-quality brands, so this year’s news is KLIM. KLIM ceates the most technically advanced clothing for motorcycles  in the world;

– a brand new SSV category for participants will be added. In short, the quadricycles that have two drivers (driver and co-driver).

More about the first stage and the mandatory registration: https://endurolithuania.com/en/events 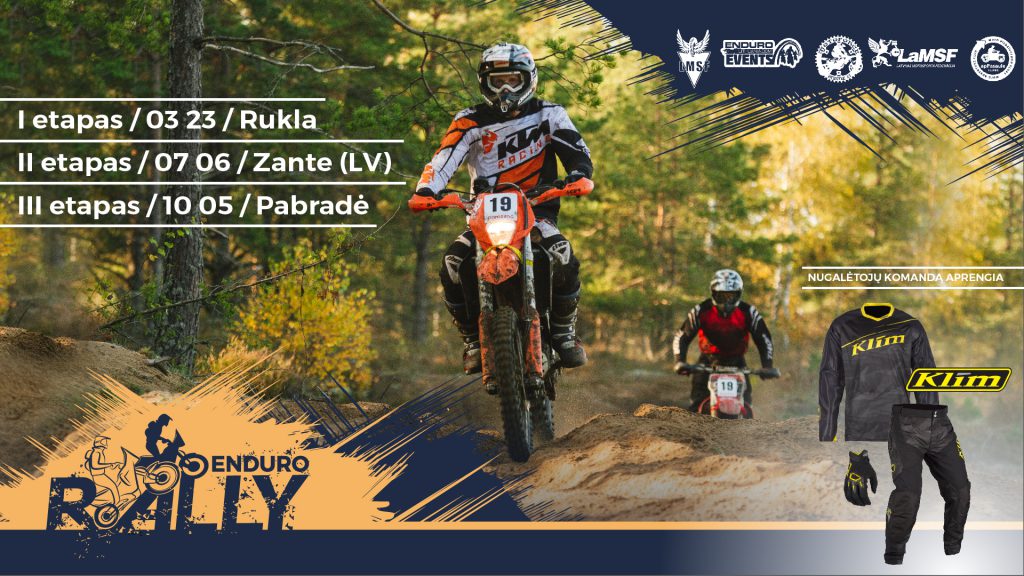 Most fans of enduro rally remember well the main emotions of the competition: beautiful autumnal nature, excitement and, of course, good old friends at the same starting line. This competition is undeniably the right decision.

Traditions are difficult to change, traditions are hard to forget, traditions create lasting value and traditions become a part of history. That’s why this year we keep following the enduro rally roots, when the most enduring remains. The enthusiastic athletes already have shown their interest in this competition, who want more attention to security and obstacles that will allow them to compete more seriously with other competitors.

It will be a pleasure this year to watch the growing competition between the two Baltic States, as we have more and more athletes from Latvia every year. The results of the first competition in Latvia show a strong attitude of the participants of this country in the strongest HARD class, but there is still no significant competition in both ATV classes. 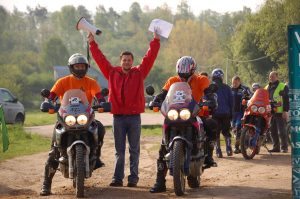 Good old times, good old friends. Ten years ago, the first enduro rally competition took place, which was also called the “Endurance Rally”. This day was the most memorable for all participants: for those who managed to finish the longest route in the history of rally Vilnius (Grigiskes) – Klaipėda (Giruliai) exceeding 400 kilometres, for others – to check their chances, which ended before they planned. It’s those times when the SOFT class was the most competitive, and the both ATV classes did not yet have such a powerful technique to overcome all the tricks of nature. Times are changing and we have what we have, but we are most excited that we are and the WAY WE ARE, because there will be again a great fest!

Want to stand out? Everything is very simple. Vast benefit to all.
How impress a friend, colleague or your main partner? What exceptional to offer, so they would take a break from their endless important work? What would immediately interest them and would leave an impression for a long time? It is well known – MOTORCYCLE. Often seen and heard, but usually labeled as risky and likely unmanageable, expensive and not easily accessible. Therefore, motorcycle is exclusive, because it easily breaks myths and stereotypes, and after carrying out its mission it can make YOU to stand out too. Especially if you decide to get acquainted with the off-road king – the light HARD ENDURO motorcycle.